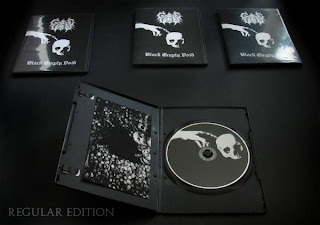 My first thought upon opening the package and seeing the cover was "This has to be inspired by MZ. 412." The clearly thought through cover lists the tracks as ritual I, II and III, and the aesthetic is cleary a nod to early black metal, so the comparison is unavoidable. You can imagine my surprise when I popped the cd in the player and heard slow soothing synthesizer strings and bird tweets coming out of the speaker. It was however a very pleasant surprise. I love being served something entirely unexpected. It doesn't take long before the music gets darker though, but the first track never loses the warmth from the beginning. Good music for dreaming, which is kind of strange for a release featuring a black and white skull on its cover.

The second track carries over the extreme minimalism, but ventures deeper into the dark. The lengthy track consists mostly of echoes of various sounds, and it wouldn't be wrong to say that the emptiness enveloping these echoes is the most noticable feature of the track. It's like listening to someone sitting in a very large hall, with just a tiny pebble to bang against the floor to make music, but amplified to fill the space. The second track is the longest one of the three at nearly 30 minutes, but like the first one the duration is just right, and certainly couldn't have been any shorter.

The third track is much shorter than the first two, and also a collaborative piece between the mysterious person behind Gate to Void – only credited as M, and someone credited as Mournful. The third track is a sharp departure from the two first tracks, both in tempo and instrumentation, and serves to reawake the listener from the trance inducing minimalism. After the two previous tracks it feels incredibly short, and a little out of place.

The music is noticably introvert, and makes very few assumptions on the listener's behalf. There is very little over communication going in, in favor of manipulation of the subconscious. The title of the album is a good place to begin for an interpretation: black empty void. To me the music is about emptiness, which is even further emphasized by the lack of track titles and information in general – both on the cd cover, and in the music itself. It's deeply minimalistic, and reminds me a great deal of Deathprod in warmth and tempo, but Gate to Void is less restrained and strict. Considering the description of the project on myspace, and M's interest in altered states I guess it's appropriate to call the recording a psychonaut's journey through the inner space of the mind. As such the recording is obviously successful.

The sound is mostly crisp, but I do find myself wondering at times if the slightly rumbling bass is intentional or a result of poor equalizing. Usually I don't really mind, but in the case of the second track the ever present hum of a jack output detracts somewhat from the total experience.

It's a good album in general, but it is a bit anonymous. It's relaxing, and meditative, but I fear also easily forgotten. This is unfortunate, considering the artistic effort one can clearly see behind the product. I would recommend Black Empty Void for its relaxing qualities, but if you're not a big fan of the genre I'm afraid it might not do very much for you.