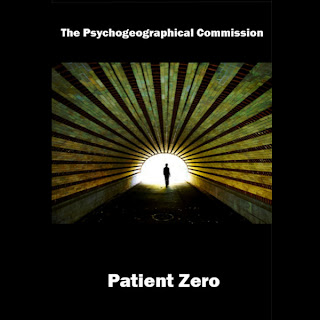 When I received the pre-release, my initial concern was whether The Psychogeographical Commission could maintain the same quality of execution as they did so flawlessly on their debut release 'Genius Loci'.
They succeed.
What I love about this project, is how they give the listeners layers upon layers to unfold side by side with the music it self. The Psychogeographical Commission is not the kind of band that shove information and pre-digested imagery in your face. Their graphics are a treasure chest for someone like me who are into history, the occult, symbols and philosophy. I keep digging deeper and deeper into their imagery. The Psychogeographical Commission has once again cast their spell on me.
And as I venture into S and Hokano's world of sound, my shoulders relax, my pulse slows down. This epic drama, this apocalyptic cinema, takes place right here and now.

This release has a much darker vibe then their debut, as initially revealed by the title itself, "Patient Zero". IE the first infected. The themes are not as simple as life and death. Rather, the album deals with the cycle of everything, from the sun, the moon, to life, since it is all connected. And everything is perishable.
One might say that their music functions as a soundtrack to this psycological movie they evoke with all their imagery.

To those of you who are unfamiliar with the Psychogeographical Commission, they could be placed in the neofolk/post punk/dark electronic genre. Their debut CD felt more in line with Legendary Pink Dots and Labradford and Death In June, and Patient Zero is maybe closer to say Current 93, Coil and Nurse With Wound. This release has more experimental soundscapes, and as mentioned earlier, a darker edge. But the tracks still have this very characteristic melancholic sound throughout, - a relaxing ray of light that lifts everything to a higher level of consciousness.

The tracks glide into each other, and there are no tracks that stick out like sore thumbs. Track #5 "Enochian on the wall" is one of my favs, as is #8 "Gutterbright to the starres", mostly due to their more experimental sound.

S (mrsix) and Hanako attempt to psychologically portray the mind of a Patient Zero and how being infected with the solar downturn at the summer solstice, affects him and his urban surroundings. And they do it well. They explain that the album was written throughout a 6 month period, at times of lunar or solar significance in multiple locations in the UK, "and the tracks all portray a thought, feeling or experience of the time of it's own conception". I will mention that the concept for this release is more complex than that of their debut release, which was very to the point. I get the cycle of sun vs life-theme, but I think there might be too many references involved for most people to wrap their head around. Sometimes less is more. I would have preferred it if the CD didn't come with a written manual. Don't over complicate, and don't explain too much.

The cover is a collage of pictures, texts, symbols, historical references and so much more. What I love about their covers is that they educate people. Well at least those who have a curious bone in their body. This cover is a library, and it's all, literary, held together by Ω. Omega. A red, synthetic thread is wrapped round thumb tacks in the shape of an Ω.. Omega is a symbol with multiple layers. From being the last letter in the Greek alphabet, to the new testament: beginning and end, to physics: Ohm, onto astronomy: the density of the universe, and that's just the beginning. Omega is the last - always. Zero Patient is not about religion - it's about reality. No gods, no masters. No heaven, no hell. And we all die. We all get infected. And none of us will be saved. How fitting is it then that "Walking with Omega" is the last track. The front cover contains a man standing at the end of a tunnel. The linear metal constructions in the ceiling creates an illusion of a man walking into the sun, into the light at the end of the tunnel. The Psychogeographical Commission has surgical precision in their execution.

I miss lyric sheets though, it would have been nice to have a good read as I'm sure the lyrics would reveal even more layers for me to dissect. The titles certainly leads us in multiple directions with their historical and metaphorical meanings and even symbols. The vocals are soothing and calming, more along the line of spoken word or poetry. This is another aspect I like about these guys, they don't try too hard. What the vocals are missing, the rest of the project makes up for by the bag full. The combination of guitar, electronic music and the soothing, whispering are lovely, it's like riding an electric wave in slow motion.

The music industry needs projects like this, and I honestly hope The Psychogeographical Commission get's the well earned attention needed. They've got the intention, the skills and the drive.

I deeply recommend this release. And once the last track fades out, get on your laptop and start to decipher the magickal map you find in the cover art. Zero Patient will learn you how to deal with life, sickness and the fear of death. It's all about the present - the present of life. Patient Zero is music for explorers. This release does not cater to the masses. But they certainly master the art of catharsis.

Patient Zero will be released 27.September 2010 and will be available to buy via psychetecture.com.
Label: Acrobiotic Records

07 - Fertile omnipotence of the underside
08 - Gutterbright to the starres
09 - The Darkness in Light
10 - Twenty Seven Openings + Alphaville 4
11 - Walking with Omega
Posted by Batcheeba at 10:05 AM